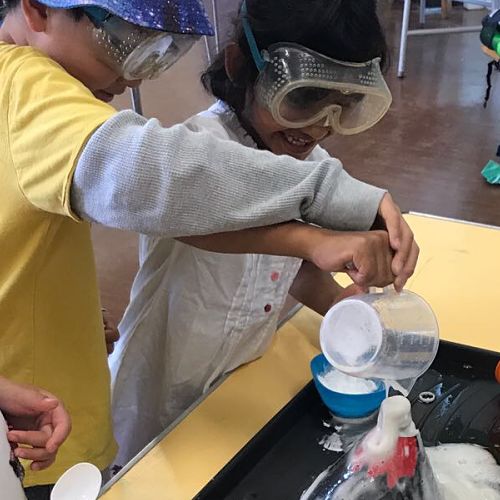 Volcanoes hold great fascination among children (and grown-ups!). Here are some ideas for making your own and experimenting with the best eruptions.

First you need to find out about volcanoes. Do you have any books about them? Try looking up ‘volcano facts for kids’ on the internet. There are some great pictures and videos available too. Do you want to make a cinder cone, stratovolcano or shield volcano? Then think about what to make it out of. You could use sand, salt dough, paper mache, Lego, junk…be creative. It will get messy though! Whatever you make it out of, it needs to be on a big tray to catch the ‘lava’. Put a small bottle inside to be the ‘magma chamber’, make sure you don’t cover the top of this.

There are a few options for making your volcano erupt. You can try them out (on a tray or in the sink!) before choosing one to go in your volcano model.

Or try a mini version of Coke and Mentos. Take a small (250ml) bottle of diet cola, drop in three Mentos and decide if that’s the eruption for you!

My favourite is a much slower eruption but it just keeps on going for ages. This one needs some 6% hydrogen peroxide (available cheaply in all chemists, don’t use any stronger than 6%). Pour 100ml into a small bottle, add a good squirt of washing-up liquid and then add the magic ingredient: a spoonful of yeast mixed with warm water. The foam ‘lava’ is safe to play with, it’s just soapy water.

How do these work?

previousDO play with your food!